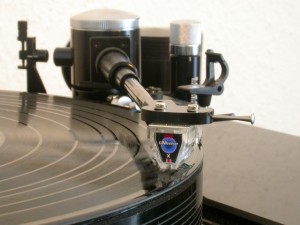 Bob Graham is kind and interesting. He has a dry sense of humor which is up my alley. His is a family business where he works closely with his American and Ethiopian born kids. It took me a couple of years of insistence and a few solid recommendations from other people in the industry to become a Graham representative.

We always seem to have one or two Graham Elites in stock!! Good to know people at high places!

Regarding Graham Phantom II and III, for more details on the leveling system and changes Bob Graham has made to make his great tonearm, even better, I let the man behind the art talk for himself.

There is a lot to say about these tonearms. The technicalities are in three patents filed by Bob Graham. Some of the characteristics are outlined below but at the end of the day, we all judge our audio equipment by the sonic difference they make.

Aside from an engineering masterpiece, Graham Phantom II lets you hear the beautiful music you play to its full beauty. Graham Phantom II is Bob Graham’s finest design and implementation to date. Long wait time but SORAsound always ensures to have a couple of extra ones in stock for you. Bob Graham’s mastery with SORAsound’s responsiveness and great customer service.

Below is a quote printed with permission, from a highly respected audiophile who is deeply familiar with many of the high-end tonearms in the market:

“after listening and comparing, there is a new king born, true in tonal color, sensational from dynamic range, and probably the real thing of analog today. The Phantom II is easy to set up, brilliant for mounting cartridge with its own alignment tool, and what i like very much, it works with much more cartridges at top level than other tonearms do.

it has its price but compared to other designs which are more expensive and worse from performance, the Phantom II is a bargain. Definitely one of the rare arms today which will be sought after in a few years as a classic one with real top performance.” 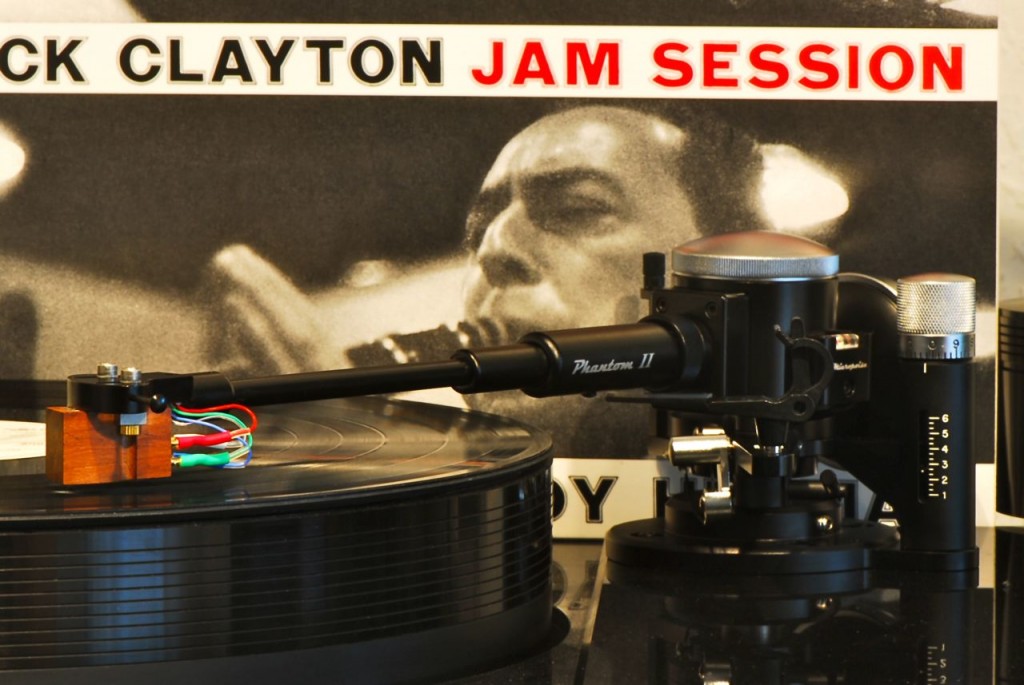 Below is relevant information obtained from Bob Graham’s website and printed with permission.

The original Phantom is the result of over two years of research into design theory, materials analysis, and extensive testing. This involved not only testing of the individual design components as they were being evaluated, but also comparing the several prototype models against Graham Model 2.2 tone-arm as well as other major tone-arms made by other manufacturers.

Bob Graham wanted to design and manufacture a tone-arm that would surpass all his previous efforts, and even exceed what other manufacturers had made to date. At the end, the B44 Phantom II exceeded even Bob’s highest expectations, surpassing even the highly-rated Phantom I.

Graham Phantom II tone-arm has refined magneglide (TM) stablizer, new internal wiring for even better detail and improved freedom from any mechanical resistance, an upgraded pivot design for even greater dynamics, and a new titanium armwand.  Together, these improvements yield greater performance in the areas of dynamics and sheer musicality, while retaining the features the earlier Phantom was noted for.

There are many reasons for these significant improvements, covered in  three patents, with other applications pending. First, the armtube is easily removable. Using Graham’s patented alignment system, the armwand offers the safety, convenience and accuracy of off-turntable cartridge installation and alignment, as well as allowing quick interchange of multiple pre-mounted cartridges. It is significantly improved from the earlier armwands. It attaches to a nearly half-inch wide stainless-steel post-and-connector that supports the armwand under tension, resulting in virtually a one-piece armtube/pivot assembly with high damping.

Second, addressing the all-important (and often ignored) area of dynamic balance. Tone-arms should have as little inertia as possible. But too often, inaccurate placement of mass distribution results in excessive resisting forces in opposition to the phono cartridge as it attempts to follow the ups and downs of a typical record. The Phantom II, in spite of its robust appearance, has been designed with a very low moment of inertia. Majority of phono cartridges can be used with ease and optimally.

At this point, a brief description of Balance Theory may be helpful. There are basically three types of static balance systems: neutral, stable, and unstable.

Stable balance, normally seen in laboratory scales, occurs when the center of gravity of the moving system is placed below the pivot point. When this type of system is displaced from its preferred rest position, it will generate an immediate and opposing force attempting to return to that original position.

Unstable balance makes no sense for tone-arm design. When the pivot point is below its required position, it will exhibit serious  problems including reduced tracking force as the arm is raised.

Neutral balance is the most desirable system for tone-arms. Here, the pivot point and the Center of Gravity of the moving system are in the same plane. When the arm is raised or lowered, there is no opposing force trying to return the arm to a rest position. The pivoting system doesn’t really know or care if the stylus is at the record surface level or a half-inch above or below it. As a result, there is no opposing force to the arm as it is traversing record deflection during play. The only downward tracking force is that of the adjustable counterweight, which remains a constant.

Previously, all true unipivots – that is, those with a single contact point for the bearing and no secondary stablizing surfaces or bearings required the use of side weights or a significantly lowered counterweight to provide stability. In general, those arms with a secondary stabilizer point require a lowered center of gravity to provide constant contact with the stabilizer guide bearing.

The drawback to both these conditions is that this design becomes a stable balance system, which will cause a tone-arm to have a preferred rest position, always trying to return to this point.   anytime the tone-arm is raised, as in tracking warped records, it results an immediate and equally opposing force that tries to push the arm back to its rest position.  The higher the warp, the more counter-force is applied.   This unalterable law of physics will work against the cantilever, deflecting it during warps, causing the magnetic system inside the cartridge to be displaced.

This, in turn, will certainly affect the reproduced sound, with diminished performance in all areas, including soundstage compression, loss of detail and dimensionality, not to mention record wear. This is why most tone-arms must have their tracking force measured at the record surface level; any height change during the measurement will cause an incorrect reading.   A tone-arm with stable balance can be identified by measuring the tracking force at the record surface level and again at a raised position above the record. If the tracking force increases at the higher position, the arm has stable balance. Bob Graham’s own previous designs – the best he could make at that time – also had this limitation due to the use of side weights to provide lateral stability.

Other unipivots with low-slung counterweights will all exhibit this force; the lower the weight, the more counter-force is applied. Although this technique is often promoted as a “high-stability” design, it does so at the expense of consistent tracking force and linear cartridge performance. . It actually results in varying tracking forces during play when traversing even small warps, accompanied by non-linear cartridge operation, and increased record wear. 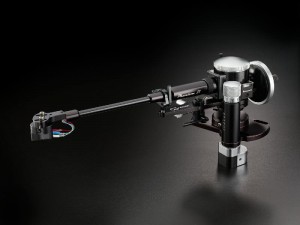 Once neutral balance is chosen for use in a unipivot tone-arm, one must remember that both the vertical and lateral planes will be affected the same way. Without proper lateral stability, such a design would not have consistent, proper vertical alignment, and the pivot would tend to flop over to one side or another. This usually occurs in the direction of the weighted cartridge offset angle mounting, and obviously must be avoided.

The answer to this lies at the very heart of the Phantom’s design and its unique ability to retrieve groove information unprecedented in Bob Graham’s experience. The key is a magnetic stabilization system which Bob calls “Magneglide” (TM). With this unique, patented system, all lateral stability, and a portion of the damping, is provided by powerful neodymium (“rare-earth”) magnets placed in a horizontal line from the pivot point of the tone-arm.

In combination with pivot fluid damping (similar to that used with the Model 2.2), the Magneglide (TM) system allows normal vertical pivoting of the tone-arm in true Neutral Balance, with vanishingly low friction; yet, provides a strong lateral stability that feels almost like fixed bearing arms. (No wobbling of the arm as it is lifted, for instance).

In addition, this dual-damped system forces the Phantom to pivot in the correct vertical plane of the stylus tip, with no rotation as the arm is raised. No regular unipivot can achieve this important geometric requirement. Even a few fixed bearing arms don’t get this right!

If the vertical motion of the tone-arm is in plane of the armtube itself (and not the correct plane of the stylus face angle), the cartridge will tend to tip over to its side as the arm is raised, as when tracking over warps. This will cause noticeable channel imbalance and reduced tracking accuracy.

With the patented Magneglide (TM) design, Graham Phantom II has a high-load, chatter-free and virtually friction-free damped unipivot bearing, combined with true neutral balance, and with the all-important geometric accuracy of correct vertical pivoting parallel with the face of the stylus tip.

If all that weren’t enough, the magneglide (TM) system also permits the application of anti-skate through the magnetic coupling of the design, thereby eliminating any direct contact or possible resonance to affect the main pivot assembly of the tone-arm. The anti-skate system is completely independent mechanically. It is easily adjusted either by a thumb-wheel rotation or sliding motion (user’s choice) of the bias weight for minute adjustments from near zero force to 3+ grams.

If your turntable already had a Graham tone-arm on it  (to get the angles correct), the Phantom is a true “drop-in” replacement. Although turntable manufacturers may understandably encourage you to use  tone-arms of their they manufacture, this is not necessary.  The modifications to make the Phantom fit are relatively easy. Bob Graham can provide our customers assistance in this area when needed.

When the Phantom is installed, we are confident that you will  agree with many others that  it is a significant improvement  over any other tone-arm. The proof  of course will be in the listening.