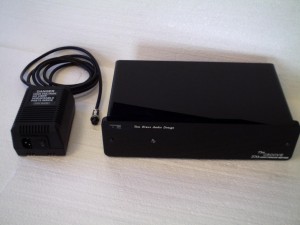 Many of our customers use Tom Evans Audio Design phono stages. All sound great. These units are priced fairly, carrying a lot of value to audiophiles. All our customers think highly of Tom’s products. So, I decided to represent Tom and offer his great products to you.

Tom is a very nice man, with two kids. He began his electronics career in defense industry. In 1989 he went back to his first professional love, building high quality and great sounding hi-fi gear. Tom always has time for his representatives and customers, explaining all the details of his products in detail. He takes great pride in his name and the products he produces. Tom’s Hi-Fi gears are so good that he called them Tom Evans Audio Design.

A click away from urther info on Tom Evans products.

Review below is by a customer of ours Mr. Paul Folbrecht.

“I’ve been using a Tom Evans Audio Design Microgroove +X for about the last three months. I consider it to be my last phono stage. (I hope I’m serious this time, and three months is a long time to go without having any desire for something better or different – at least for me.)Discovering Tom Evans gear was a bit of a revelation for me, that began last year. I had read of it but never heard it – after all, it’s not very easy to hear (the phono stages are easier to come across than the Vibe/Pulse and the Linear A). I started with a used Linear A, and was very impressed with that piece: it had an uncanny ability to unravel detail (including microdynamics) against an absolutely black background, and was spectacularly “fast” and extended as well. Of course, those things in itself are not too mean a trick – a lot of good (solid-state) gear can do that. But what the Linear A did that did set it apart was being as fast, quiet, and detailed while simultaneously having *full* tonal saturation and *never* sounding the slightest bit edgy, or bright.

I then added a Vibe/Pulse (Lithos 7 version, bought used from the same dealer) – and it made an even bigger difference to the system (over the highly-regarded tube line stage I had been using). It was the Vibe/Pulse that was really a game-changing piece of equipment for me: a blackground blacker than I had ever heard before, with quite stunning macro dynamics, and full and complete tonal saturation with a lovely, perfectly smooth and rich midrange and treble. After using it for several months, any tubed preamp was just too slow and veiled for me. Prior to that point, I had never found a solid-state preamp I preferred to even a mediocre valved unit. I’m not saying they’re not out there – I’m sure very prices MBL and other solid-state gear can pull of proper tonal saturation without being edgy – but I do believe it is generally VERY expensive to do it.

At this point I decided I wanted to go “the full monty” with a Tom Evans phono stage and that I should buy a new piece to support the company. I decided on the middle-of-the-read Microgroove + X after reading reviews. (I have seriously toyed with abandoning vinyl altogether, and done so for short periods, so I didn’t think a greater expense was warranted.)

I placed the order through local dealer SORAsound (great to deal with) and received the unit after only a few weeks.

After being plugged-in for only a few hours, the unit’s potential was evident, but it did seem to take a few days to display what it’s really capable of. Once it had settled down, I was quite thrilled, and amazed – it really exceeded my expectations.

It was the signature Tom Evans sound – fast, neutral, completely extended, but tonally pure and harmonically complete, with perfect balance – to an even higher degree. (After all, the line stage is providing something like 12 dB of gain while the phono stage is at around 70 dB! I guess it’s hard to argue that the phono stage is not the most important part of a vinyl amplification chain.)

My analog setup is a Basis Ovation table, early TriPlanar arm, and Ortofon Rondo Red cartridge. (Yes, the cart is the bottleneck there in terms of cost, but it doesn’t really sound like it!) I had on-hand with the Microgroove +X a well-regarded tubed phono stage (with SUTs for the MC gain stage) that retails for about $6000 (almost three times the TE’s price). The tubed unit was also *very* good, and they were surprisingly close not only in overall performance but in sonics, but I did end up preferring the Microgroove. It had a substantially lower noise floor and was audibly more extended, although the tubed unit was very good in both regards too. The tubed unit was more “lush” in the midrange but I came to see that as a coloration and preferred good recordings without it.

That’s about it. Like most Tom Evans gear, it doesn’t really look like it’s worth the asking price and it’s so light that thick interconnects can lift it, but, well, who cares. Tom is, I think, proud of the fact that he refused to market “audio jewelry”, and isn’t it more sensible to put the money where it counts? (I’ve come to like the understated but purposeful aesthetic of the Vibe, but the Microgroove is so tiny I hide it behind the platform the line stage is on anyway.)”